It's a Dirty Job: Cleaning Out the Chicken Coop

Lately, the sun has been shining and daytime temperatures have gotten well into "shorts weather," as the girls refer to it. We've been listening to the woodpecker pecking away at a new nest opening and at night (and sometimes during the day) we could hear frogs chirping down in the dry creek. Clearly, spring was here, which could only mean one thing...
It was time to clean out the chicken coop in preparation for our own chickens. 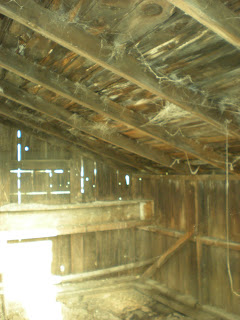 Grade A spiderwebs, no?
I knew this wouldn't exactly be an easy task, since, based on the accumulated..."debris"...in the coop it appeared that the previous owner postponed the last scheduled cleaning of the coop in anticipation of his own move. Now we were stuck with an overdue coop and when I mentioned cleaning it to TMOTH he said, "Have fun with that."
Whatever, the girls were excited about getting chickens so I knew they would help me. Right?

In light of the thriving population of mice inhabiting the coop (and the possibility of hantavirus) I decided safety was the best approach and declared that anyone helping with the coop clean-out would need to wear a long sleeve shirt, long pants, a handkerchief over their hair, washable shoes, eye protection, work gloves and a disposable face mask. I take contactable zoonotic pulmonary viruses seriously. 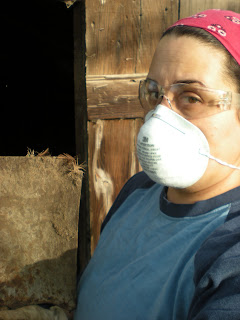 Unfortunately, I chose the warmest morning in nearly six months to undertake this project, which meant once I announced that today was THE day for the project the girls were no longer interested in helping me and instead decided the rope swing was feeling neglected.

Funny that I should feel like the Little Red Hen while cleaning the coop, no? 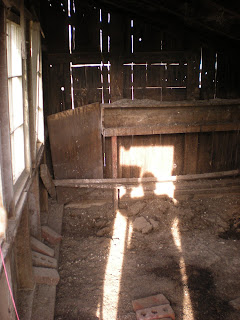 Today is a good day to shovel.
Anyway, I started by using a broom to sweep down the copious amounts of spider webs (and dust) and then moved on to the shoveling. I began shoveling next to the coop door, and the loads had a certain satisfying cleaving pattern. Based on how quickly that section went I was sure I'd be done in no time.
Of course, since I'm new to chickens it never really occurred to me that the worst part would be under the roosts. By the time I got back there I was melting and the goggles were fogging up (not to mention, the claustrophobia was kicking in). Unlike the area near the door, under the roosts was a good five-to-six inch moist and smelly layer waiting for me. Ugh.

Suddenly the shovel loads were not quite as satisfying.

I had been placing my shovel loads into our old plastic wagon, which straddled the coop door. We don't yet have a wheel barrow so this was the next best thing. Unfortunately, I filled the first load so heavily that the wagon's bulging sides lodged the wagon in the door frame. So...I had to squat (nearly putting my face in the wagon contents) to lift the load up and over the door threshold.
Don't overfill your wagon or wheelbarrow, people. Lesson learned.

My plan was to dump the wagon contents in a corner of the back half-acre, since the manure was still too "hot" to add directly to a garden. Unfortunately, the path required for that plan meant that I would have to pull the 100+ pound wagon of manure uphills several hundred feet.
Change of plans.

I decided to dump the wagon contents at a closer corner of the back half-acre which would require uphill pulling only after the wagon had been emptied. Genius! Well, genius except for the part where I forgot to get my foot out of the way before switching directions.
After getting the first load dumped (and being thoroughly drenched in sweat and dust by now) I decided that my goal to finish emptying the coop that day may not happen. Instead, I resolved myself to get at least three wagon loads out.

And three loads it was because after the dumping the third load I realized that a wagon wheel had broken. Sometimes the universe helps you stick to your plans. 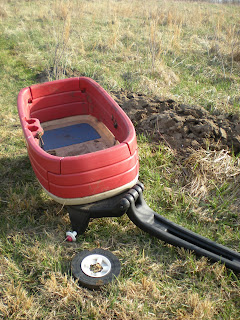 Wagon broken. Watch out for the cholera.
A week later (and on a much cooler day) I finished up the worst of the coop cleaning. Now we just have to hose everything down, replace the roosts and get bedding, feeders and waterers installed.

And, of course, get chickens. Which we may or may not already have...because sometimes I'm not a very patient person.
--Rational Mama
Posted by Michelle at 8:28 AM

Welcome to a Commercial-Free Blog!

What is "Rational Living?"

"Rational Living" began as the story of one family's attempt to live on WWII U.S. civilian rations for one year (click here to see the original description of the rationing project). The rationing project helped the family solidify their goals of living a sustainable, mindful lifestyle. As a result, they bought a small homestead on the outskirts of town...that journey is now documented here at "Rational Living."

Rational Mama: Main author of the Rational Living blog. History nut, sci-fi geek, avid gardener and foodie. Would like to learn how to make cheese, perfect her whole wheat bread recipe and become a better crocheter. Serves as main writer and researcher for the blog.

The Man of the House (TMOTH): Reader, philosopher, nerd, and even-tempered goofball. An all-or-nothing kind of guy. Guest author for Rational Living. Would like to get more experiencing hunting and would like to learn how to make wine.

Sissy: Oldest of the two Rational Living children. Book reader, piano and clarinet player. Is pretty sure the feral cats will succomb to her charms.

Eowyn: Youngest of the two Rational Living children. Family clown, movie watcher, and lover of all animals. Can't help herself around home-grown tomatoes.